Tiles on the former island of Walcheren

In studying the history of the early ceramic wall tile on the former island of Walcheren in the Dutch province of Zeeland a problem is that the Vlissingen archives were burnt during the anti-Napoleonic invasion by the English in 1809. In Middelburg one-third of the old city centre and the municipal archives were hit by German high-explosive shells on 17th May 1940.

Therefore no documents exist referring to tile factories on Walcheren in the 17th century. Only part of the national archives were saved in 1940. However, they contain a valuable source of information, namely the annual accounts for all the craftsmen who were employed on the 'Hof van Zeeland', the former abbey of Middelburg. These documents were not kept in the municipal archives, because the abbey, which was confiscated in 1574, became the administrative centre for the whole of Zeeland. Unfortunately, the splendid abbey buildings were largely destroyed in 1940.

The entire annual accounts for the years 1603 to 1795 were preserved, including those of the master mason officially appointed for the administration offices. Each year he had to submit an account stating which buildings he and his assistants had worked on and for how many days, and what materials they had used. These accounts were scrupulously examined before he received his pay.

Research carried out over the years 1603-1680 has produced a unique body of 17th-century data on the use of tiles including their 'names' and prices, and of the various types and formats of flagstones. For the history of the 17th-century tile this discovery is of the utmost importance.

The 17th-century tiling of the rooms in the 'Hof van Zeeland' was carried out in three stages:
1600-1625: the fireplaces were tiled with polychrome, relatively expensive tiles;
1625-1650: somewhat simpler tiles were applied to dadoes and wainscots, as is to be seen in the paintings of interiors by Pieter de Hoogh (1629-1684);
1651-1700: entire walls, mainly of passages, back parts of the houses and kitchens were tiled, particularly with plain white tiles or tiles with small pictures in blue. This fashion seems to have continued into the 18th century.

An interesting feature is the great variety of names given to the decorated tiles at the time of the production. Unfortunately, there is no way of identifying them all as the tiles have not remained in situ. We do, however, have a clear picture of changes in taste: the polychrome tile goes out of fashion and is replaced on parts of the wall by tiles with a blue picture or plain white tiles. The tiles were becoming cheaper and cheaper, too, as a result both of a simpler decoration and of the fact that they succeeded in making the tile thinner.

Although we do not have any certainty about the existence of tile factories on the former island of Walcheren, we know the names of two faience manufacturers in 1565: Joris Andriesz (from Antwerp) and Adriaan Ingelsz. It was probably these two who made the polychrome tiles found in Middelburg, Veere and Vlissingen. The tiles with a picture in diamond found on Walcheren show many similarities and were probably manufactured on the island. There is no evidence that there were any tile factories on Walcheren later in the 17th century. A great many tiles were imported from the province of Holland, as is known from other sources.

Around 1620, owing to the popularity of Chinese porcelain in the Low Countries, the design of ceramic tiles underwent a major transformation. Polychrome tiles were superseded by blue ones, and where formerly the connecting corner decorations were painted in negative, they were now painted directly in blue, resulting in new corner motifs, one of them being the ossenkop (ox-head).

Clearly a number of motifs had been directly borrowed from Chinese porcelain. However it appears that, contrary to a number of previous theories, not only the meanders, the Chinese gardens, the Chinese symbols and the accolade-shaped frames were originally Chinese, but also the ossenkop: all these decorative elements are found together on a certain type of Chinese egg-shell porcelain dish, which was imported into the Low Countries in considerable quantities.

The Jews on the Malabar Coast in the south of India go back a long time. In 1568 they founded a synagogue in the city of Cochin. The Rahabi family was the most influential family there after 1646. They had relations with the Jewish community in Amsterdam. In 1762 Ezekiel Rahabi had the floor of the Paradesi Synagogue paved with tiles ordered in Canton. 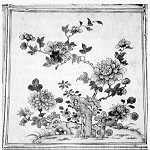 The impressive floor is paved with some 1100 hand-painted Chinese porcelain tiles measuring c. 29 x 29 cm. It is composed of horizontal rows of tiles with a repeating design. There are four different designs, that of the first row being identical with the fifth, the second with the sixth, and so on.

The bottommost row depicts a lotus and a prunus, which symbolize summer and winter, and at the same time express a contrast such as that between man and wife in marriage. The tree peony on these tiles points to love and is considered a good omen. The row of tiles above shows a chrysanthemum together with a willow and boulders. Chrysanthemum and willow symbolize autumn and spring, another contrast between husband and wife in marriage. The rocks symbolize fidelity and a long life. In the third row we see a tree peony and a boulder, together representing the queen of flowers. It is a sign of good fortune, to be relied on for ever. Finally there is a row of rural scenes with the familiar willow pattern, which in 1780 was adopted by Minton for his transfer print on English creamware and thus became world famous.

It is a moot point whether the images of the tiles in this synagogue were intended symbolically, considering that a synagogue is the place where marriages are solemnized.

Between 1880-1900 the tile factory of Ravesteijn in Utrecht produced two series of tiles depicting animals and Turkish men and women for export to Britain. The six-inch format (15 x 15 cm) made them suitable for use in surrounds of cast-iron grates for hearths and other items of furniture.

Although these tiles are not found in extant Ravesteijn catalogues, sponsen (pricked stencils) from the Ravesteijn factory with designs for both series have been preserved in the Tichelaar archives in Makkum in the province of Friesland.

The tiles in question can also be found in a tile catalogue of circa 1890 issued by the cast-iron grate manufacturer Thomas Elsley in London, who imported Dutch tiles for use in his fireplaces. The Elsley catalogue shows two tiles with Turkish women under design no. 30 and one animal (lioness) tile under design no. 48.

The animal series is based on print sources such as J. Jonston's Historia Naturalis published in Frankfurt in 1650. It consists of two types of animals: European animals such as the horse, cow, bull, cat, deer (four different types) and sheep, and also exotic animals such as the panther, lion, elephant and rhinoceros. To date 19 different animals have been recorded and it is conceivable that the whole series consisted of perhaps 20 to 24 designs.

The series with Turkish men and women is less well known and surviving examples are rare. This series is based on the prints in Nicolas de Nicolay's Les Quatre Premiers Livres des navigations pérégrinations orientales, published in Lyons in 1568. In 1576 a Flemish edition was published by Willem Silvius in Antwerp under the title De Schipvaert ende Reysen gedaen int Landt van Turckyen deur N. de Nicolay. The series shows men and women in 16th-century Turkish costumes indicating their profession and status.

The fact that examples of both series are found mainly in Britain may have something to do with the Aesthetic Movement, which had a strong interest in Oriental design as well as blue-and-white porcelain, while William Morris fostered a liking for hand-made and hand-decorated objects. Hand-painted blue-and-white Dutch tiles with exotic themes were ideally suited to these British design fashions.

A big tile picture of the Tile Factory 'Holland' restored

In 1994, the oldest surviving faience factory, Koninklijke Tichelaar in Makkum, in the province of Friesland, restored a tile picture made for a special occasion, measuring no less than 504 pressed tiles (12 x 42 tiles), of 15 x 15 cm.

The picture came from the W. van der Lugt factory, which produced barrels and crates, in the 2nd Rosestraat in Rotterdam. A.P.W. van der Lugt, co-manager at the time, had been presented with the tile picture by his employees on 1 January 1914, on the occasion of his 50th jubilee.

When the factory was demolished the tile picture was preserved and it has recently been recovered. The large picture was probably manufactured in 1913 by the Faience and Tile Factory Holland in Utrecht, where Jan Carel Heytze was chief designer at the time.

The tiles were not just grimy, but also required replacement and restoration. First the yellow grime was removed. The tiles that had to be replaced were manufactured from a comparable type of material, then painted and glazed in the identical technique, in this case the underglaze technique. The paint (blue) was applied on a white base, which was then covered with a transparent glaze. The tiles were then fired. Partially damaged tiles were repaired, and missing pieces were replaced, using the same technique. The original and replaced parts were fitted together with a special adhesive. The joint was then touched up to render it invisible.

Finally the picture was divided into six panels which were fixed to an Aerolam F-board. This consists of an aluminium honeycomb framework covered with two synthetic layers, which is sturdy and light in weight at the same time.